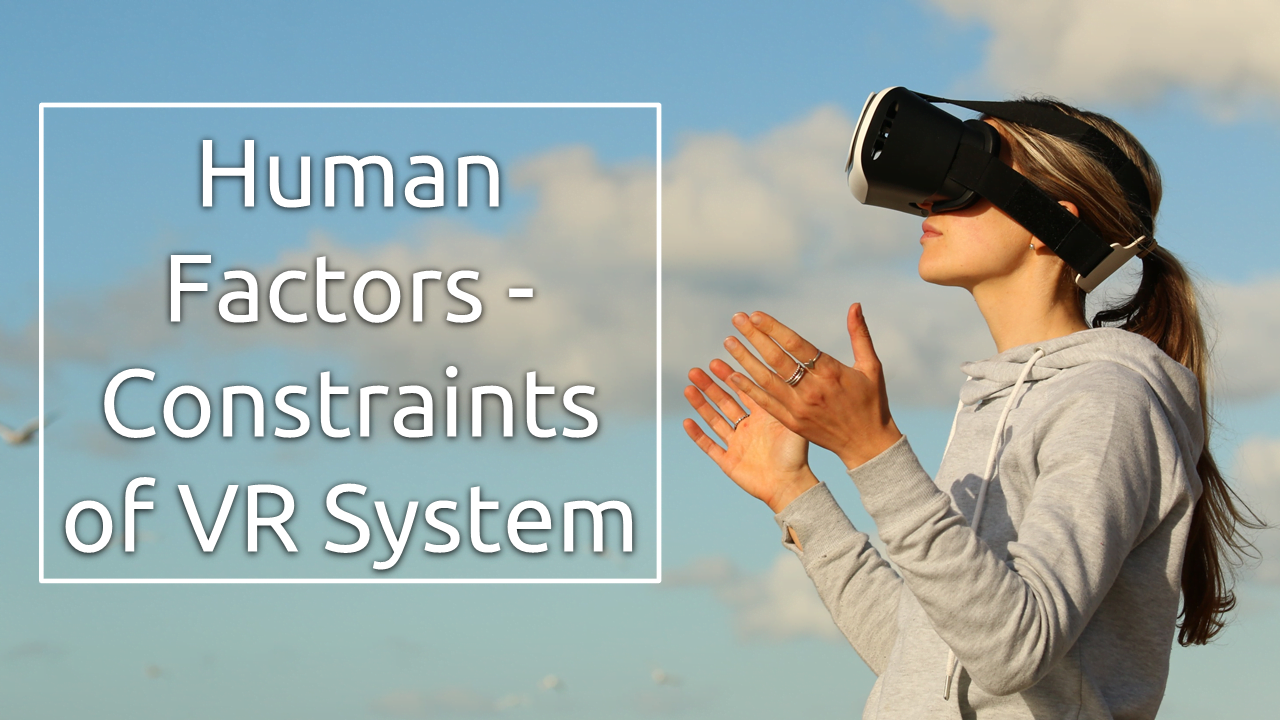 Incontrovertibly, systems based on Virtual Reality (VR) have started drawing more attention from the past decade. It’s now the hot topic of modern research as well. Because people are spending a lot of money to get through this “Ultimate Escapist Dream”. But, natural limitations experienced by the researchers and technologists are still unknown to many of us.

For an explicit and comprehensive understanding of limitations, we’ve to observe the effects of human factors known as “Constraints” involved in VR. Naturally, we’ve 5 basic senses but the utility of each sense is quite apart from that of another sense within the lifespan. According to a scientific research, a human uses the sense in the following order:

This diverse distribution has also classified the intensity of research work. Sight sensing and hearing are the major axis of research. VR systems don’t include smelling, touching and tasting.

Visual information is most important in creating the illusion of immersion in the virtual environment. Scientifically, we’ve to generate the results meeting or exceeding the limits of human visual systems. Unfortunately, technology is not capable to do so. That’s why, technologists make compromises on the implications on quality of resulting visual systems.

It is the sharpness of viewing. Acuity varies for the different arc distances from the line of sight. The eye can resolve a separation of one minute of arc. The area of highest visual acuity covers a region of about two degrees around the line of sight. The sharpness of viewing deteriorates sharply beyond this central region i.e. at 10° of the off-axis eccentricity it drops ten minutes of arc.

It refers to the flickering phenomena perceived by humans. Repeated impulses update the watching screens. Too low refresh rates, especially for higher luminescence and big displays, causes the perception of flickering. To avoid this effect, manufacturers use screen refresh rate that is more than “Critical Fusion Frequency Screen Refresh Rate”. This is 15 Hz for small screens with low illumination and 50 Hz for big screens with high illumination. Whatever the requirement is, technology is meeting the user’s demand.

Dynamically, the human eye has a range of ten orders of magnitude which is far more than that of any currently available display. None of the available displays can cover the whole color gamut. Therefore, we must use special purpose color mapping techniques to achieve the best picture quality.

The mechanism of hearing sound is complex and poorly understood because many of us interrupt this in the same way i.e. sound of a particular waveform and frequency sets up a characteristic pattern of active locations on the membranes. There has been no way to trace the wiring of the brain, no way to apply simple stimuli and see which parts of the nervous system respond, at least not in any comprehensive detail. The only research method available was to have people listen to sounds and describe what they heard. The variability of listening skills and the imprecision of the language combined to make psycho-acoustics a rather frustrating field of study.

The most important thing in communication is hearing what isn’t said.

Amplitude of sound corresponds to loudness. The ratio between the threshold of pain and threshold of sensation is on the order of 130 dB. Noticeable difference in loudness varies from 3 dB at the threshold of hearing to an impressive 0.5 dB for loud sounds.

The frequency of the sound affects the sensation of loudness. We compromise on the ability to make loudness judgement for sounds of less than 200 ms duration. Below that limit, length of sound affects the loudness; shorter is softer. Duration longer than 200 ms don’t affect loudness judgment, beyond the fact that we tend to stop paying attention to long unchanging tones. At high frequencies, the change in the sensitivity is more abrupt, with sensation ceasing entirely around 20 kHz. The threshold of pain increases in the top octave also.

It is the quality of sound which involves frequency. The quality of possessing pitch in the first place depends on the duration and spectral content of the sound. If a sound is shorter than 200 ms or so, pitch assignment becomes difficult with decreasing length up to a sound of 50 ms. Most subjects studied can match pitches very well, usually getting the frequencies of two sine waves within 3%.

Presence of another noise or tone enhances the threshold of hearing for a particular tone. White noise reduces the loudness of all tones, regardless of absolute level. If the bandwidth of the masking noise reduces, the effect of masking loud tones also reduces, but the threshold of hearing for those tones remains high. If the masking sound is narrowband noise or a tone, masking depends on the frequency relationship of the masked and masking tones. At low loudness levels, a band of noise will mask tones of higher frequency than the noise more than those of lower frequency. At high levels, a band of noise will also mask tones of lower frequency than itself.

We are also able to perceive the direction of a sound source with some accuracy. Perception of the difference of arrival time or difference in phase of sounds at each ear determines the left and right location. If there are more than two arrivals, we choose the direction of the first sound to arrive, even if later ones are louder. Localization is most accurate with high frequency sounds with sharp attacks. Shape of our ear provides the maximum information.

In acoustics, direction is so much important than speed. Often, enriched pieces of information go nowhere fast.

Recognition of sounds that are similar in aspects other than pitch and loudness is not well studied, but it is an ability that everyone seems to share. We do know that timbre identification depends strongly on two things, one waveform of the steady part of the tone and other one is the way spectrum changes with time. Audio pattern matching probably builds up this ability, a process that documents with vision. Once we have learned to identify a particular timbre, recognition is possible even if the pitch changes or if parts of the spectrum filter out.

For the sake of simplicity, we call these limitations redundant that is totally wrong. Researchers seem entrapped between high level of efficiency and constraint, one to converge and other to diverge. Still, there are quite nominal advancements in VR systems. Above mentioned human factors limit the frame work of technologist to some extent. With the improved precision level of baseline components, results are coming closer to the level of perfection i.e. maximum ease and excellent exposure level for the VR user.